Start a Wiki
WELCOME TO THE MEDITERRANEANVISION WIKI!
This is a wiki with information about the Mediterraneanvision Song Contest as well as its spin-offs. Here, you can find everything about the editions, the countries, the artists and the songs of the contest.
Everyone is able to contribute to the wiki by editing. Please be respectful and not vandalize any content or insert false information. Please also make sure to use the correct formatting and to add the correct categories to pages, as it makes it a lot easier for the admins.

The Mediterraneanvision Song Contest, often shortened MSC, or Mediterraneanvision, is a song contest on Youtube held among the members of the Mediterranean Broadcasting Union since January 2018 and is inspired by the Eurovision Song Contest. The current and official MSC executive supervisor is Aris odi. Each country's head of delegation gets to select an entry for each edition either by internal or national selection. Then the countries get to vote for each show (semi-final or final) to determine the qualifiers and the winner of the edition.

Each country's head of delegation gets to select an entry for each edition either by internal or national selection. Then the countries get to vote for each show (semi-final or final) to determine the qualifiers and the winner of the edition.
READ MORE... 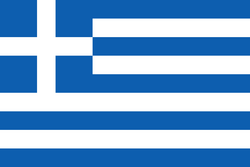 Greece debuted in and hosted the first edition of Mediterraneanvision Song Contest and has participated in every edition since then. The Greek broadcaster, ERT, has been in charge of the country's participation since the first edition. The broadcaster selected their entries internally from the 1st to the 5th editions and has used a national final (Wave) to select their entries since the 6th edition.

Greece is one of the most successful countries in the contest, having six top tens including two victories. The first victory of the country was achieved by Helena Paparizou in the first edition on home soil with the song "An Me Deis Na Klaío" featuring Anastasios Rammos. The second victory was achieved by MARINA with her song "To Be Human" in the seventh edition. The country is currently ranked first in the Mediterraneanvision Ranking of Nations while its worst placement was sixth after the third and fifth editions.

Retrieved from "https://mediterraneanvision-song-contest.fandom.com/wiki/Mediterraneanvision_Song_Contest_Wiki?oldid=10835"
Community content is available under CC-BY-SA unless otherwise noted.