The Mediterraneanvision Song Contest 6 was the sixth edition of the Mediterraneanvision Song Contest. The contest took place in Pristina, Kosovo, following Kosovo's victory at the fifth edition in Tirana, Albania, with the song "Ku Vajti", performed by Elvana Gjata. 34 countries participated in the contest, with Moldova making their debut appearance. Jordan, Libya and Tunisia all made their return after a one-edition break. Israel and Morocco withdrew.

The winner was Monaco with the song "Syndrome", performed by Palmer. This was Monaco's first win. Croatia placed 2nd and Albania placed 3rd.

The contest took place in Kosovo, the winning country of the previous edition. 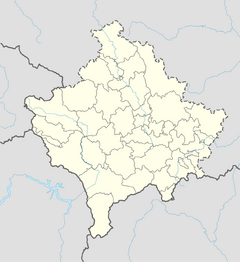 Pristina
The location of the host city is marked in blue. 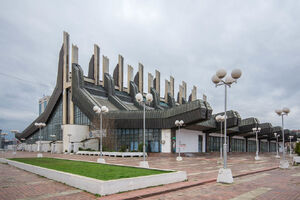 Palace of Youth and Sports, the host venue of the Mediterraneanvision Song Contest 6.

On the 3 January 2018, a bidding phase began. Pristina was the sole bid, thus the city was chosen to host. Below is the host city and its bid:

Pristina (Albanian: Prishtina or Prishtinë Albanian: [pɾiˈʃtiːnə]; Serbian: Priština or Приштина) is the capital city of the district of Pristina and the Republic of Kosovo. The city is situated some 250 kilometres northeast of Tirana, 90 kilometres north of Skopje, 560 kilometres south of Budapest and 300 kilometres east of Podgorica.

The city has a majority Albanian-speaking population, alongside other smaller communities. With a municipal population of 204,721 inhabitants (2016), Pristina is the second-largest city in the world with a predominantly Albanian-speaking population (after Tirana in Albania). Within Serbia, it would be the 4th largest. Geographically, it is located in the north-eastern part of Kosovo close to the Goljak mountains.

During the Paleolithic Age, what is now the area of Pristina was envolved by the Vinča culture. Pristina was home to several Illyrian and Roman people at the classical times. King Bardyllis brought various tribes together in the area of Pristina in the 4th century BC, establishing the Dardanian Kingdom. The heritage of the classical era is still evident in the city, represented by the ancient city of Ulpiana, that was considered one of the most important Roman cities in the Balkan peninsula. In the Middle Ages, Pristina was an important town in Medieval Serbia and also the royal estate of Stefan Milutin, Stefan Uroš III, Stefan Dušan, Stefan Uroš V and Vuk Branković.

When the Ottomans conquered the Balkan peninsula, Pristina was an important mining and trading centre due to its strategic position near the rich mining town of Novo Brdo. The city was known for its trade fairs and items, such as goatskin and goat hair as well as gunpowder. The first mosque in Pristina was built in the late 14th century while under Serbian rule. Tolerance and coexistence of religion and culture have been part of the society for centuries.

Pristina constitutes the central junction of Kosovo, due to its strategic location and its importance in the fields of politics, economy, transport and culture. Almost all domestic and foreign companies, governmental and scientific institutions have their headquarters across the city.

The theme for the contest, "#WhereWillYouGo?", was unveiled on the 5 January 2019 on the contest's Google+ Community.

Elvana Gjata was chosen to be the presenter of the contest on the 4 January 2019.

The running orders were made randomly. 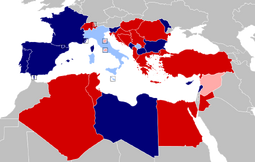 Italy, Kosovo and Malta also voted in this semi-final.

Austria - Despite initially confirming their return, ORF confirmed the country's non-participation on the 15 February 2019 due to scheduling issues.

Israel - Despite initially confirming participation, IPBC confirmed the country's withdrawal on the 18 January 2019 due to financial issues.

Morocco - Despite initially confirming participation, 2M TV announced their withdrawal from the contest on the 31 January 2019 without giving any reasons.

Retrieved from "https://mediterraneanvision-song-contest.fandom.com/wiki/Mediterraneanvision_Song_Contest_6?oldid=11282"
Community content is available under CC-BY-SA unless otherwise noted.