The Mediterraneanvision Song Contest 4 was the fourth edition of the Mediterraneanvision Song Contest. The contest took place in Ta' Qali, Malta, following Malta's victory at the third edition in Barcelona, Spain, with the song "We Are the Soldiers", performed by Ira Losco. All 36 countries that were eligible to take part at the time participated. This edition was the first to include semi-finals.

The winner was Albania with the song "Piedestal", performed by Inis Neziri. This was Albania's first win. Serbia placed 2nd and Andorra placed 3rd.

The contest took place in Malta, the winning country of the previous edition. 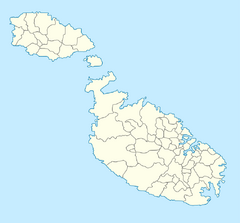 Valletta
Locations of the candidate cities: the chosen host city is marked in blue, while the eliminated cities are marked in red. 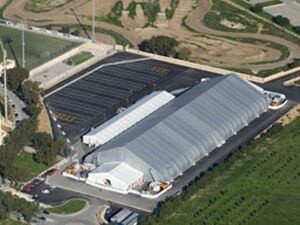 On the 12 June 2018, a bidding phase began. A day later on the 13 June 2018, the MBU and PBS announced that Ta' Qali had been selected as the host city, overcoming the bids from Marsa and Valletta. Below are the 3 cities and their bids:

Ta' Qali is a wide-open space in the limits of Attard in central Malta, which contains the national football stadium, Ta' Qali National Park, a crafts village, and a national vegetable market which is locally known as the Pitkalija.

Shortly before World War II, the area was used to build a military aerodrome and a station for the Royal Air Force(RAF), which the British called RAF Ta Kali; Maltese place names were often corrupted in this fashion. RAF Ta Kali was operational throughout the war and continued to be used as an RAF airfield until the mid-1950s. Latterly, U.K.-based squadrons visited Ta Kali as part of their annual proficiency training.

Since the departure of the RAF, the location has been transformed into a recreational area. The area is small in scale but considered by some in Malta as an ideal place to go for a picnic and spend weekend afternoons. The National Park also includes an amphitheatre. A number of international concerts were staged at the park, including artists as diverse as Status Quo, Deep Purple, Fish, Iron Maiden, Demis Roussos, Alannah Myles, Bonnie Tyler and many others. International artists such as Riccardo Fogli have also planted their own trees in the Park.

The newly built U.S. Embassy stands across from the Ta'Qali National Park. In July 2011 the embassy relocated to Ta'Qali from Floriana where it stood for nearly fifty years.

Ta' Qali National Park Ta' Qali still fulfils part of its former role as an airfield but the only aircraft that take off from the greatly diminished landing strip are scale models, whose owners make part of a club located in Ta' Qali. Today, many of the military huts and buildings have been converted into workshops where Maltese craftsmen produce their handiwork, and the Ta' Qali Crafts Village has become an important tourist attraction. There is also the Malta Aviation Museum where one can find different types of aircraft related to Maltese aviation history. Before being converted to a recreational park the airstrip was used in the first car races ever held by the Maltese; nowadays the Sport Muturi has its off-road tracks where the annual motorsport championship is held.

The theme for the contest, "#Unity", was unveiled on the 13 June 2018 on the contest's Google+ Community.

Moira Delia was chosen to be the presenter of the contest on the 13 June 2018. 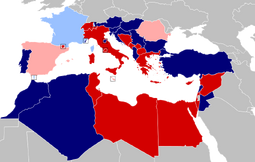 Malta, Romania, and Spain also voted in this semi-final.

France, Gibraltar, and Liechtenstein also voted in this semi-final.

Retrieved from "https://mediterraneanvision-song-contest.fandom.com/wiki/Mediterraneanvision_Song_Contest_4?oldid=11188"
Community content is available under CC-BY-SA unless otherwise noted.