Greece holds the record for most victories, with two wins in the first and seventh editions. The most recent winner is ALITA from Syria who won the ninth edition with the song "Human Nature".

On the 26 December 2017, Aris Odi, the executive supervisor of the MBU, created the Mediterraneanvision Song Contest, a song contest that would be held between the members of the MBU.

The contest began on the 25 January 2018 in Kalamata, Greece. The city was selected by Aris Odi to host the first edition because it was where he was born. 15 countries took part, each submitting one entry to the contest.

Greece was also the first-ever country to win the contest. This meant that the first 2 contests were both held there.

The format of the contest has changed over the years, though the basic tenets have always been thus: participant countries submit original songs, performed live on a television programme broadcast across the Mediterraneanvision Network by the MBU simultaneously to all countries. A "country" as a participant is represented by one television broadcaster from that country: typically, but not always, that country's national public broadcasting organisation. The programme is hosted by one of the participant countries, and the programme is broadcast from the auditorium in the host city. During this programme, after all the songs have been performed, the countries then proceed to cast votes for the other countries' songs: nations are not allowed to vote for their own song. At the end of the programme, the song with the most points is declared as the winner. The winner receives, simply, the prestige of having won—although it is usual for a trophy to be awarded to the winning songwriters, and the winning country is formally invited to host the event the following edition.

The programme is invariably opened by one or more presenters, welcoming viewers to the show. Between the songs and the announcement of the voting, an interval act is performed. 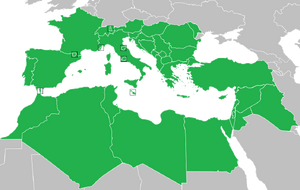 Participation since the first edition:
Entered at least once
Never entered, although eligible to do so
Entry intended, but later withdrew
Competed as a part of another country, but never as a sovereign country

Map showing the host cities of the nine editions.

Each full member has got a certain broadcaster that is responsible for the choice of the artists and songs the country is sending for each edition. The broadcaster must have paid the MBU a participation fee in advance of the deadline specified in the rules of the contest for the year in which they wish to participate.

Thirty-eight countries have participated at least once. These are listed here alongside the edition in which they made their debut:

a) Before the Prespa agreement in 2018 presented as Former Yugoslav Republic of Macedonia.

Most of the expense of the contest is covered by commercial sponsors and contributions from the other participating nations. The contest is considered to be a unique opportunity for promoting the host country as a tourist destination.

Preparations for the event start a matter of days after the host wins in the previous edition, and confirms to the MBU that they intend to—and have the capacity to—host the event. A host city is chosen—often a national or regional capital city—and a suitable concert venue is identified. Since the seventh edition, the MBU has been more open to hosting the event in an open-roofed stadium should the host country not have a suitable indoor venue at the time of hosting. The two largest venues to have hosted were the Stade Louis II in Monaco (which held approximately 18,000 people when Monaco hosted in #7) and the Palau Sant Jordi in Barcelona (which also held approximately 18,000 people when Spain hosted in #3).

The hotel and press facilities in the vicinity are always a consideration when choosing a host city and venue.

After the first contest was hosted by Greece, it was decided that henceforth the winning country would host the contest the next edition.

The logo, which was created by Aris Odi, was introduced in the 4th edition. The logo features the name "Mediterranean", below that an olive branch next to the word "vision", below that the words "Song Contest" and below that, the name of the host city appears along with the number of the edition. The words "Mediterranean" and "vision" are formed in the font "Forte" while the letter "v" in vision has been replaced by a heart where the flag of the host country appears. The logo was generally received positively by both the press and the fans.

Since the first edition already, slogans were used for the contest. In each edition, the host broadcaster is in charge to decide on the slogan of the edition and based on it, develop the contest's theme and visual design.

There are several rules of the contest in order to enter. The main rule of the contest is that the country has to officially join the MBU with a certain broadcaster before applying to enter the contest. Regarding the broadcaster, any broadcaster can be accepted by the MBU if it consists of the qualifications of it. There are also rules regarding the entries, such as that of the Eurovision Song Contest, songs and cover songs are not allowed to compete in the contest or that the singer must be over the age of 16.

The first voting system was in use between the first and ninth editions. Each country's professional jury awarded 12, 10, 8–1 points to their 10 favourite songs. International viewers vote for their favourite songs, and the votes are converted to points by proportional representation.

It was announced that from the tenth edition, televoting would replace the online voting. 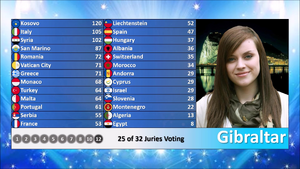 Since the first edition, all the participating countries have been voting in the final, including the countries that failed to qualify from the semi-finals.

The order of the voting nations is often made randomly, although typically, the host country of the previous edition announces their points first and the current host country announces theirs at the end. After the interval act is over, when all the points have been calculated, the presenter(s) of the show call upon each voting country, in turn, to invite them to announce the results of their professional jury's vote. Often the opportunity is taken by each country to show their spokesperson standing in front of a backdrop which includes a famous place in that country. Traditionally, the scoreboard has taken a different format each edition. Firstly, points 1–8 and 10 are shown together and the spokesperson continues with the highest point, 12. The song which receives the 12 from the country is usually played along with a bar below showing the top 3 at that moment. The televoting is presented by the presenters starting from the country that received the lowest score from the public and going up to the country that received the highest score.

Under the current rules, in the event of more than one country scoring the same total number of points, a count is made of the numbers of countries who awarded points to each of the tied countries, and the one who received points from the most countries is declared the winner. If the numbers are still tied, it is counted how many sets of maximum points (12 points) each country received. If there is still a tie, the numbers of 10-point scores awarded are compared—and then the numbers of 8-point scores, all the way down the list. In the extremely unlikely event of there then still being a tie for first place, the song performed earliest in the running order is declared the winner.

Expansion of the contest

The number of countries participating has steadily grown over time, from fifteen in the first edition, to the joint record of 36 in the fourth and ninth editions. In the most recent edition in the ninth edition, a total of 36 countries took part, with 26 appearing in the final.

Because the contest is a live television programme, a reasonable time limit must be imposed on the duration of the show. 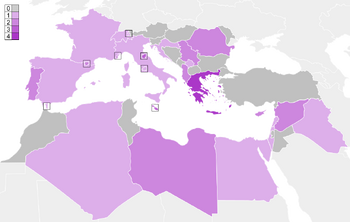 During the first 3 editions, the contest consisted of just a final. Since the 4th edition, 2 semi-finals have been introduced. The countries that place within the top 10 from each semi-final advance to the final, along with the "Big 6".

Countries that place within the top 6 in one edition, become members of the "Big 6" in the next edition, which means they skip the semi-finals and thus they automatically qualify for the final. 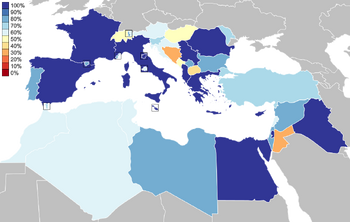 Each country's qualification rates from the 4th edition to present

The ten countries which receive the most votes in each semi-final qualify for the grand final. They are announced by the presenters in a random order. Full voting results are withheld until after the grand final, whereupon they are published on the MBU's website. To date, Albania, Andorra, Cyprus, Egypt, France, Greece, Iraq, Italy, Malta, Romania, San Marino, Serbia and Spain have always qualified to the final since the implementation of the semi-finals system in the fourth edition.

A number of spin-offs and imitators of the Mediterraneanvision Song Contest have been produced, some national and other international.

Similar competitions that are still held, include: